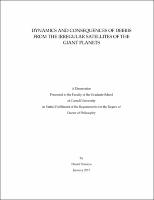 Each of the solar system's giant planets host a large population of irregular satellites, small moons on distant orbits that were gravitationally captured early in the solar system's history. Because of the frequent collisions between these objects, most of the original population's mass should have ground to dust in a few hundred Myr (Bottke et al. 2010). This dissertation investigates the fate of this debris, and in particular the contamination by this dust of the larger moons that orbit close to the planet. We argue that the ten-fold darkening of the Saturnian satellite Iapetus' leading hemisphere was triggered by this dark infalling material. We also present the first observations in scattered visible light of the Phoebe ring, a vast dust ring sourced by Saturn's largest irregular satellite Phoebe. Additionally, we argue that this process of mass transfer from the irregular satellites may explain the hemispherical color asymmetries observed on the largest Uranian moons (Buratti and Mosher 1991). The dynamics of this process are complicated by Uranus' extreme obliquity, which creates a range of semimajor axes in which particle orbits undergo large-amplitude, chaotic eccentricity oscillations. This phenomenon was first explained by Tremaine et al. (2009); we generalize their results by incorporating the effects of radiation pressure, which are important for small dust grains. Finally, as part of a separate project, we provide constraints on the properties of the putative planet Fomalhaut b, in light of its newly revised, extremely eccentric orbit (Kalas et al. 2013).