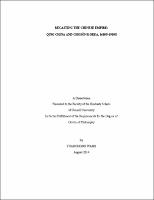 My dissertation examines the transformation of China from a pre-modern cosmopolitan empire into a modern multiethnic sovereign state between the seventeenth and twentieth centuries. I explore, in particular, Qing China's changing relations with Chosŏn Korea over that period, which both reflected and contributed to shifts in the nature of the Chinese polity. It aims to explore the unique trajectory of China's changes within the context of international relations in East Asia and the world from the early seventeenth century onward. It reconstructs the narrative of Qing China's Zongfan (tributary) relations with Chosŏn Korea (1392-1910) by re-evaluating conventional scholarly appraisals of the following four questions: (1) when the Qing (1636/1644-1912) first identified itself with "China"-the Central Kingdom, or Zhongguo-in the Chinese world; (2) how Qing China built an imperial enterprise and governed its expansive Eurasian empire in a multiethnic and multicultural context; (3) whether the China-centric Zongfan system was thoroughly replaced by the treaty port system; and (4) whether China exercised imperialism in Central Asia in the eighteenth century and in Chosŏn Korea in the late nineteenth century. The dissertation offers new explanations of these issues by using rich Chinese, Manchu, Korean, Japanese, and English historical archives. First, I argue that the Manchu regime had gained a political identity as "China" by claiming centrality in the Chinese world already in the 1630s. I further argue that the Manchu regime strengthened this "China" identity through its intensive practice of the Zongfan arrangement with Chosŏn Korea from 1637 to 1643, a time before the Manchus crossed the Great Wall to conquer the Ming's territories and march westward. This pre-1644 redefinition of the Manchu regime in light of its Zongfan relations with Chosŏn, against the time-honored Chinese orthodox and politico-cultural background of the civilized-barbarian distinction, helped lay the foundation for it later to position itself as the exclusive civilized center of the Chinese world. Second, I demonstrate that as the Qing built a gigantic Eurasian empire and a China-centric cosmopolitan order in the eighteenth century, it used its Zongfan relationship with Chosŏn as a yardstick for managing its external relations with other political entities. I term the Qing-Chosŏn relationship the "Chosŏn Model" because of its prototypical status. Through this model, the Qing accomplished its prolonged process of institutionalizing its self-identification as the civilized Central Kingdom and "Heavenly Dynasty," on the one hand, and its identification of Chosŏn as well as other subordinate countries of the Qing as "countries of barbarians." This dual institutionalization demonstrates that the Qing and Chosŏn legitimated each other through the transformation of their relations, and on this basis acquired mutually constitutive political identities in the China-centric world framework. Viewed from this perspective, the Chinese empire under the Qing manifested itself in two different dimensions, which could explain the transformations of both China and its subordinate iii countries in the late imperial and modern times. Third, I put forward a new analytical framework for understanding the unprecedented changes of the Zongfan system in the late nineteenth century, when both Qing China and Chosŏn Korea were introduced to the treaty port system and international law, which, imported from the West, regarded the two as coequal sovereign states. I argue that the Zongfan system at the time consisted in two co-existing and correlative dual diplomatic systems, including what I term the "outer dual system" and the "inner dual system." The two systems related Qing China, its "outer fan," and Western powers in different yet similar relationships of reciprocity. This new analytical framework also demonstrates that the Qing did not exercise imperialism in Korea in the late nineteenth century. Meanwhile, I point out that the Zongfan system was only partly destroyed by the Sino-Japanese War of 1894-1895. Rather, this system persisted in an altered form, crossing the 1911 and 1949 divides, into the contemporary era. The historical legacies bequeathed by the Chinese empire under the Qing have been acting as a vehicle for China's transformation into a multiethnic modern sovereign state and for China's maintenance of political legitimacy and unification within the post-1949 Chinese state. iv