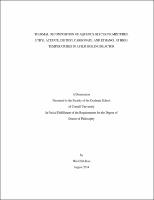 This study employs film boiling as a means to thermally decompose organic gas in a relatively low temperature liquid pool. Film boiling is a multiphase heat transfer mode characterized by a vapor film surrounding a heated surface immersed in a pool of subcooled liquid. Due to the relatively low thermal conductivity of gases compared to liquids, the vapor film acts as an insulating layer between the surface and liquid with potential to support a large temperature drop that can promote chemical conversion of the vapors flowing in the film. The vapor thus serves as a reactant which decomposes in a reactor configuration that is essentially self-assembled. Decomposition by film boiling of the following organic liquids is discussed: aqueous glycerine (C3H5(OH)3) mixtures, ethyl acetate (CH3COOC2H5), diethyl carbonate ((CH3CH2O)2CO), and ethanol (C2H5(OH)). Ethyl acetate and diethyl carbonate decompose in a unimolecular process. Thermal decomposition of aqueous glycerine mixtures is more complicated. Ethanol, which is a product of diethyl carbonate decomposition, can thermally decompose in several routes which are discussed. The experimental results presented suggest that aqueous glycerol mixtures decompose by film boiling primarily into synthesis gas (a mixture of hydrogen (H2) and carbon monoxide (CO)), which can be used as an alternative fuel. Ethyl acetate and diethyl carbonate decompose by a unimolecular process as expected.