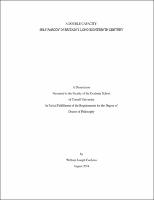 Although parody has long been recognized in Swift, Sterne, and mock epic poetry, self-parody has received scant critical attention, despite its pervasive use in many types of eighteenth-century texts. My dissertation defines self-parody as a mode in which the multiple implied reader positions suggested by a text mutually critique each other. I argue that these incommensurable reader positions reveal the era's divergent political valences encoded within-and contested through-the development of generic norms. Many eighteenth-century genres responded to a cultural context that witnessed the overlap of residual Christian ideals, still-dominant aristocratic paradigms of authority, and emerging structures of the early capitalist marketplace; as these ideologies displaced one another, they nonetheless inherited and revised previous social and literary formations. This overlap allowed formal cleavages in texts so that seemingly conservative works could be inscribed by and give expression to the values of new, often marginalized, communities of readers. Novels by Horace Walpole, Clara Reeve, and Jane Austen demonstrate that the merger of realist and romance traditions in Gothic opened a space for queer counter-narratives that defied a hetero-normative and increasingly positivistic judicial system. Similarly, pastoral poetry shifted the identification of its shepherd-figures from the upper- to the lowerclasses in works by Alexander Pope, John Gay, and George Crabbe, producing irresolvable class-based subject positions that precipitated Romanticism's protest against industrial exploitation. Likewise, the demise of heroic drama and the rise of bourgeois drama created generic fissures, through which plays by John Dryden, John Gay, and George Lillo explored the failure of competing gender archetypes, especially the masculinity of their putative heroes. Finally, the reception of nominally sentimental novels is often divided between sentimental and satiric interpretations; against both these views, I claim that texts by David Hume, Henry Fielding, Oliver Goldsmith, and Frances Brooke display a dramatic conception that ironically exteriorizes character into social role-playing aligned both with and against an early capitalist marketplace. My analysis of self-parodies challenges traditional readings of the Enlightenment as enacting a consolidation of hegemonic discourses that reinforced already privileged perspectives; instead, I argue, these texts demonstrate a countervailing development of more pluralistic readerships and viewpoints.