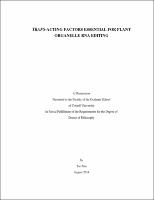 In higher plants, RNA editing is a C-to-U conversion that corrects chloroplast and mitochondrial transcripts that are otherwise defective. Although plant RNA editing has been known for over two decades, the molecular mechanism is poorly understood. Until recently, all the known trans-acting factors were members of the Pentatricopeptide Repeat (PPR) protein family, which serve as recognition factors via specific interaction with cis-elements upstream of the C targets. An additional editing factor, RIP1, was identified by a proteomics study. RIP1 is a dual-targeted protein that selectively interacts with PPR editing factors and affects 14 editing events in chloroplasts and over 400 editing events in mitochondria. RIP1 belongs to a small protein family, 5 members of which were later shown to be major editing factors. Homology searching with the RIP protein led to the discovery of ORRM1, a hybrid protein which possesses a RIP-like domain at its N terminus and an RNA Recognition Motif (RRM) domain at its C terminus. Loss of ORRM1 results in editing defects in multiple plastid sites. A transient complementation assay indicates that the editing activity of ORRM1 is carried by the RRM, which places it in a different family than RIP proteins. Additional members of the ORRM1 family might be involved in plant RNA editing. A plastid-targeted protein immunoprecipitated with a functional epitopetagged ORRM1. Loss of this protein leads to editing defects at many plastid sites, most of which are also controlled by ORRM1. Homology searches with this plastid protein identified several related proteins which are all organelle-targeted. The function of this new family still needs further investigation. So far, four types of trans-acting factors have been identified for plant organelle RNA editing, which reveals an unexpected complexity of the editing machinery.