Self-Employment Of Chinese Immigrants In Ethnic Enclaves: A Comparative Study In Flushing And Monterey Park City 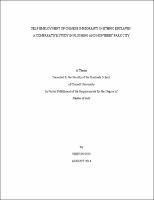