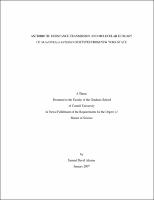 Salmonella enterica is a gram-negative, rod shaped bacillus, which inhabits the intestines of mammals, reptiles and birds. In the United States, Salmonella is one of the leading causes of food-borne illness, and is typically acquired through the consumption of contaminated food or water. Modern public health practises have lead to a decrease in the number of Salmonella infections, however, there has been rise in the number of infections caused by antimicrobial-resistant Salmonella. The rise of antimicrobial-resistant Salmonella subtypes, including the appearance of subtypes resistant to ceftriaxone, represents a particular concern. Ceftriaxone is used to treat invasive cases of Salmonella in children, and is closely related to ceftiofur, an antibiotic commonly used to treat diseases of cattle. In order to develop a better understanding of the evolution and transmission of ceftiofur resistance in Salmonella, we characterized ceftiofur resistant and sensitive Salmonella isolates from seven New York dairy farms. A total of 39 isolates from these seven farms were analyzed for evolutionary relatedness (by DNA sequencing of the Salmonella genes fimA, manB, and mdh), antibiotic-resistance profiles, and the presence of blaCMY-2, a beta-lactamase gene associated with resistance to cephalosporins. Our data indicate that (i) resistance to ceftriaxone and ceftiofur were highly correlated with the presence of blaCMY-2; (ii) ceftiofur resistant Salmonella were geographically widespread as shown by their isolation from farms located throughout New York state; (iii) ceftiofur resistant Salmonella isolated from farms represent multiple distinct subtypes and evolutionary lineages as determined by serotyping, DNA sequence typing, and antimicrobial-resistance profiles; and (iv) ceftiofur resistant Salmonella evolved by multiple independent acquisitions of an identical blaCMY-2 allele and by clonal spread of ceftiofur resistant subtypes. A collection of 179 human and 166 bovine clinical Salmonella isolates obtained from across New York State over the course of one year were characterized using serotyping and multilocus sequence typing (MLST) scheme based on the sequencing of three genes (fimA, manB, and mdh). The 345 isolates were differentiated into 52 serotypes and 75 sequence types (STs). Serotypes and STs were not randomly distributed among human and bovine isolates and selected serotypes and STs were exclusively associated with human and bovine isolates. A number of common STs were geographically widely distributed, including isolates representing the emerging Salmonella serotype 4,5,12:i:-, which was found among human and bovine isolates in a number of counties in New York state. Phylogenetic analyses supported that serotype 4,5,12:i:- is closely related to Salmonella Typhimurium and that Salmonella Newport represents two distinct evolutionary lineages that differ in their frequency in human and bovine isolates. A number of isolates carried two copies of manB (48 isolates) or showed small deletion events in fimA (9 isolates). Our data indicate that (i) serotyping and MLST typing both provide for sensitive subtype discrimination of Salmonella; (ii) bovine and human Salmonella subtypes represent distinct and overlapping populations; (iii) a number of Salmonella clonal groups, including emerging subtype 4,5,12:i:-, are geographically widespread among human and/or bovine populations; (iv) Salmonella Newport represents two distinct phylogenetic lineages that appear to be host specific; and (v) duplication and deletion events in manB and fimA may provide a mechanism for rapid diversification of Salmonella surface molecules.