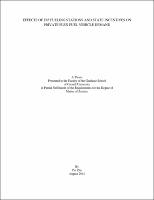 The main goal of this paper was to examine the single directional impact of fueling stations that offer E85 on vehicles that carry the fuel - flex fuel vehicles (FFVs). Another objective was to evaluate the effectiveness of state incentives aiming at promoting private FFV adoption. The study explored a panel data of FFVs sold to private consumers in the 366 Metropolitan Statistical Areas (MSA) in the U.S. from 2007 to 2012, the number of E85 fueling stations in the corresponding areas and period, and state incentives including tax credit, purchase rebates, purchase loans, and tax exemption. Using fixed-effects linear model, random-effects tobit model, and fixed-effects instrumental variable model with fueling station incentives and government FFV fleet incentives as instruments, the results confirmed that increasing the density of E85 fueling stations leads to increased FFV demand. Specifically, increasing 1 station per million people increases FFVs' share in total number of vehicles sold by 0.1%. Moreover state income tax credit and purchase rebates are effective at stimulating FFV demand, while the results are inconclusive for purchase loans and tax exemption, due to limited variability and number of MSAs that offer these kinds of incentives.