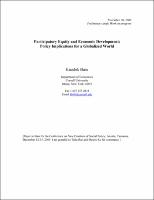 The role of a person’s identity and sense of integration into society as instruments of economic development has been vastly underestimated in the literature in economics. We talk of policies to subsidize the poor and give direct support to alleviate poverty. But in the long run, what is critical is that we instill in people a sense of belonging and having certain basic rights as citizens. What the poor and the marginalized in society lack is a sense of “participatory equity.” This paper tries to advance this perspective by building a new model where a person’s community identity matters, ex post, in determining if he or she will be poor, even though (unlike in the Spence model) all persons are identical ex ante.The paper also draws on data collected from an NGO-run school in Calcutta to illustrate the role of a school child’s sense of ‘belonging’ in determining how the child performs academically. The theory and the empirical work are inputs into the larger, more general idea that when people feel marginalized in a society, tend to ‘give up’. A substantial part of the paper is devoted to the policy implications of these analytical ideas and empirical results in the context of national policies and globalization.