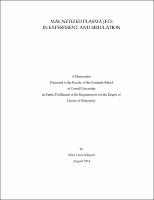 Over five years, this experimental campaign has investigated novel configurations of thin aluminum (Al) foils exploded with intense electric current pulses. These experiments allow for the study of the ablation of thin foils and liners, produce extreme conditions possibly relevant to laboratory astrophysics, and aid in computational code validation. They were carried out with Cornell's COBRA pulser, which drives 1 MA into inductive loads with 100 ns rise time. In these experiments, Ohmic heating of the foil leads to the production of ablated surface plasma (ASP) around the foil. This ASP (ne ~1024 m[-]3 ) near the foil carries some of the load current and develops an overheating-filamentation instability which leads to the development of many (~ 20) warm (~10 eV) plasma tendrils near the foil. This work demonstrates that applying a static or slow magnetic field (up to 1.5 T over 120 [MICRO SIGN]s) can deflect or suppress these tendrils which carry currents of ~10 kA. The outflow of ASP (with supersonic axial velocities approaching 300 km s[-]1 ) also leads to the creation of a strongly collimated hydrodynamic jet (ne up to 1026 m[-]3 ) on the axis of symmetry. In experiments with an applied axial field, this outflow compresses the applied Bz on axis (by a factor of 4 in simulation). Compared to the regular jet, the magnetized jet develops more slowly, has a greater angular divergence, and is hollowed on axis (by an order of magnitude). The jet has a radius ~1 mm and an axial extent ~25 mm. This jet behavior has been observed with time-gated pinhole extreme-ultraviolet emission imaging and 532 nm laser interferometry. A spec- ˚ troscopic diagnostic observes Doppler shifts (up to 1 A) in spectral lines (580 nm C-IV doublet) emitted by carbon-seeded ASP 5 mm above the foil (ne ~1023 m[-]3 ) which indicates rotation speeds approaching 50 km s[-]1 with a 1 T applied axial field. Results from extended-magnetohydrodynamic simulations with the code PERSEUS closely match the experimental results.