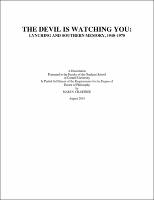 This dissertation is a cultural history of lynching in African American and white southern memory. Mob violence had become relatively infrequent by 1940, yet it cast a long shadow over the region in the three decades that followed. By mining cultural sources, from folklore and photographs to my own interviews with the relatives of lynching victims, I uncover the ways in which memories of lynching seeped into contemporary conflicts over race and place during the long Civil Rights Era. The protest and counter-protest movements of the 1950s and 1960s garner most of the attention in discussions of racial violence during this period, but I argue that scholars must also be attentive to the memories of lynching that register on what Ralph Ellison called "the lower frequencies" to fully understand these legacies. For instance, African Americans often shielded their children from the most painful memories of local lynchings but would pass on stories about the vengeful ghosts of lynching victims to express their disgust with these unpunished crimes. By interpreting these memories through the lenses of silence, haunting, violence, and protest, I capture a broad range of legacies, from the subtle to the overt, that illustrate how and why lynching maintained its stranglehold on southern culture. "The Devil is Watching You" offers what I call the "blues sensibility" as an alternative to the Freudian sense of "working through" that dominates the literature on historical trauma. If the blues are, as Ellison defined them, "an impulse to keep the painful details and episodes of a brutal experience alive in one's aching consciousness, to finger its jagged grain, and to transcend it, not by the consolation of philosophy but by squeezing from it a near-tragic, near-comic lyricism," then many black southerners infused a blues element into their memories of lynching. Freud defined psychological recovery as taking control over traumatic memories through narration, but African Americans who spoke out too directly could face violent reprisals. In the enduring spirit of the blues, blacks often confronted these painful memories under the cloak of metaphor and irony to transcend the past, even if just for a spell.