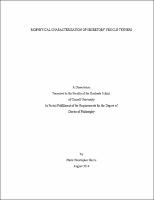 Although exocytosis has been widely studied, much remains to be discovered. In particular, the identities and mechanical properties of the tether that links a secretory vesicle to the target membrane during the tethering phase of exocytosis are not known. A method to measure vesicle-vesicle tethering interactions with a dual optical trap was modified to detect vesicle-vesicle fusion via dye transfer. Vesicles were loaded with a fluorescent label and allowed to bind. The fluorescence intensity per vesicle volume was measured, but showed no conclusive evidence of dye transfer. A novel method was developed to measure nanomechanical properties of secretory vesicle-plasma membrane tethers by combined AFM force clamp and TIRF microscopy on membrane sheets from PC12 cells expressing the vesicle marker ANFeGFP. Tether extensions were composed of multiple steps with variable length. Tethers were more easily unfolded in the presence of GTP[gamma]S, as indicated by a higher frequency of short tether extension events. A mean length for the short extension events of ~7 nm was identified, consistent with extension lengths expected from unfolding of a single alpha helix of the exocyst complex. The frequency of these extension events was markedly increased when a fluorescent vesicle was identified at the cantilever tip, indicating that the method reveals specifically the biomechanical properties of physiological vesicle-plasma membrane tethers. The stepwise tether extension events observed with this method are consistent with progressive unfolding of helical domains of the exocyst complex. This is a highly versatile method that paves the way for future experiments on the mechanical and regulatory properties of secretory vesicle-plasma membrane tethers.