The Development And Function Of Visual Play In Non-Ad Advertisements: As Seen In The Spring/Summer 2012 Series Of Online Brassiere Advertisements In Western Fashion 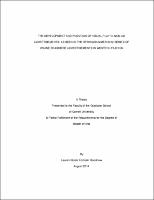