The Dark Side Of White Lies: How Gender-Biased Feedback Contributes To The Glass Ceiling 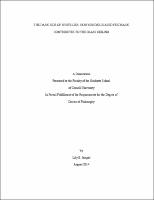 Although explicit endorsement of sexism has declined, covert barriers to the advancement of women in the workplace remain. In this dissertation, I argue that women are given benevolent but less accurate feedback about their performance and that this communication bias is accentuated by stereotypical beliefs about women. I additionally argue that this gender feedback bias has significant consequences for women and for workplace productivity and I discuss possible interventions that could be developed to ameliorate the bias. Although intentions may be benevolent, unequal feedback may undermine success in the workplace if women are not receiving accurate information needed to improve performance. In study 1a, people upwardly distorted evaluations of female authors' work when giving feedback but not to male authors. The results suggest that people tell more white lies to women about their performance. Study 1b demonstrated that this elevated feedback was not just "shifting standards" in evaluation of men and women but white lies. In study 2a, people were more likely to assume an employee was female if the employee had been given inaccurate feedback. In study 2b, people justify their assumptions about gender using language related to stereotypes about women's emotionality. In Study 3, participants who held stereotypical views about women were more likely to tell white lies to women. Study 4 demonstrates that one of the potential problems with a gender bias during feedback is a mismatch between behavior and women's actual desires regarding biased feedback. Study 5 explores the possible performance consequences of being told white lies. And finally, in Study 6, I attempt to design and evaluate a possible intervention for use in the workplace in order to attenuate the gender feedback bias. These findings are interpreted using a benevolent sexism framework and the workplace implications for a feedback bias for women are discussed. Collectively, the studies suggest that white lies during performance feedback to women may contribute to the maintenance of the "glass ceiling." Key words: gender performance lying feedback sexism language