Determining The Energy Profile And Polymorphs Of 6,13-Tips Pentacene In Vacuo And In Solvent 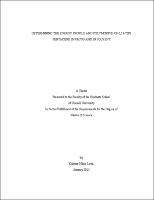 Organic semiconducting materials are gaining popularity as solar cell materials, in large part because of their ability to be processed onto flexible substrates and to be manufactured more cheaply. However, organic materials are not nearly as efficient as silicon in regards to charge transport. To circumvent this, a process called solution shearing on 6,13-bis(triisopropylsilylethynyl) pentacene (6,13-TIPS pentacene) significantly reduces the pi-orbital overlap, thereby enhancing the charge transport by an 80% increase. To fully appreciate what is happening at an atomic level and how shearing the unit cell to conform to a configuration that is both energetically favorable and conducive to charge transport, an atomically explicit model of molecules of 6,13-TIPS pentacene were analyzed via ab initio and Molecular Dynamics techniques. In vacuo, the parameters of the unit cell [a,b,[gamma]] were varied and subjected to minimization calculations, which yielded an energy profile. From this profile, we were able to identify the five lowest energy configurations which were well aligned with the five polymorphs determined experimentally. Closer examination of the molecular configurations suggested that the fluctuations in the energy profile were due to the bending and twisting of the acene backbone, the wagging of the silylethynyl groups, and the rotating of the methyl groups. Compared to an equilibrium structure, there is a 4.5° deviation in the acene backbone and a nearly 10° difference in the silylethynyl angle across this energy landscape. However, when comparing the changes in these different angles against the energy profile, the minima for both are closely aligned. The crystal was also studied in ten different solvents represented by a Lennard-Jones atom, which varied only in size. The new structure was submitted to energy minimization calculations. From this data, it was determined that as the solvent size increases, the stability of the unit cell decreases. Based on the data gathered, the energy profile of 6,13-TIPS pentacene is significantly affected by the rotating, wagging, and bending of the various side groups and the acene backbone. Whether these deviations occur in sync or are a result of a "domino effect" is not yet clear. The size of the solvent also impacts the energy profile; as the solvent radius increases, the molecules in the unit cell can be seen to almost push at the solvent in an effort to expel it from the unit cell.