Low-Level Perceptual Features Of Children'S Films And Their Cognitive Implications 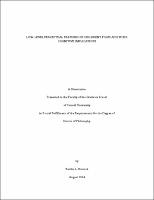 Discussions of children's media have previously focused on curriculum, content, or subjective formal features like pacing and style. The current work examines a series of lowlevel, objectively-quantifiable, and psychologically-relevant formal features in a sample of children's films and a matched sample of adult-geared Hollywood films from the same period. This dissertation will examine average shot duration (ASD), shot structure (specifically, adherence of shot patterns to 1/f ), visual activity (a combined metric of onscreen motion and movement), luminance, and two parameters of color (saturation and hue). These metrics are objectively quantified computationally and analyzed across films. Patterns in children's formal film features are predicted reliably by two variables: the intended age of the film's audience and the release year. More recent children's films have shorter ASDs, less visual activity, and greater luminance than older children's films. Luminance also reliably predicts character motivation (protagonist or antagonist) within films. Films for older children are reliably darker than films for younger children. When comparing the Hollywood sample to the children's sample, children's films are reliably more saturated and have higher ASDs than their Hollywood counterparts; however, these effects are largely driven by expected differences between animated and live action films rather than the intended audience of the film. The type of children's film (cel animation, computer-generated animation, or live action) also reliably predicts many of the trends in the data. Newer cel animated films have shorter ASDs and less visual activity; cel animated films for younger children have longer ASDs and more 1/f-like shot structure than cel films for older children. Age and year interact in predicting saturation in cel films: saturation has increased over time in films for young children and decreased over time in films for older children. Live action films reliably have increased in 1/f-like shot structure and luminance over time. Ultimately, many of the trends present between adult-geared and child-geared films are the result of an abundance of animated films for child audiences. Implications of childgeared art and media are discussed.