A Spirit Of Destruction: The Origins Of The Indonesian Military'S Institutional Culture 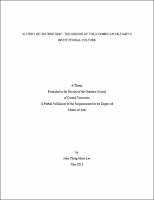 The origin of the Indonesian military has its roots in the local militia forces (Pembela Tanah Air-PETA) formed by Imperial Japanese Army (IJA) during WWII. The Indonesian soldiers recruited into PETA units formed the nucleus of what eventually became the Indonesian National Armed Forces (Tentara Nasional Indonesia -TNI). However, while the importance of the PETA experience to the Indonesian military's formation is widely acknowledged, there has been little scholarship examining the nature of the training imparted, and how that foundational experience shaped the subsequent nature of the TNI. The profound influence of the IJA on the PETA soldiers resulted in a distinct military institutional culture that became ingrained during the Indonesian revolution, and further developed during subsequent decades of internal, counterinsurgency conflict. This thesis traces that line between PETA and the modern TNI, and argues that many of the TNI's historically problematic characteristics have their roots during the PETA period. The study begins by examining the background of the formation of PETA, focusing on the nature of the training, especially in comparison to the Japanese Army's doctrine of that period. This is followed by an exploration of the role and influence of PETA-trained Indonesian officers on the formation and early years of the TNI, and how the PETA ethos became institutionalized in the military. In particular, a "scorched earth," guerrilla warfare mentality became central to the TNI's identity. By the beginning of the New Order, the PETA generation of officers had been firmly in control of nearly all the leadership positions in the TNI for two decades. It was this cohort that led the TNI through the two bloodiest post-independence events in Indonesian history: the 1965-66 killings, and the 1975 invasion and occupation of East Timor. This thesis uses East Timor as a case study to demonstrate the enduring influence of the TNI's institutional culture. By 1975, most of the PETA generation officers in the TNI had retired and were no longer an active influence. The Timor case is also unique as the TNI's only largescale, conventional military operation in a foreign territory, in contrast to its long history of internal conflicts. The TNI had also seemingly modernized, adopting much of U.S. and Western military doctrine and equipment. Yet, despite these outward changes, the TNI's actions in East Timor reveal an institutional culture still rooted in its PETA-era origins, and highlight the effects of deeply ingrained norms of "scorched earth" violence. The thesis concludes that the TNI's military institutional culture, which was repeatedly reinforced through decades of internal state violence, was both expressed and re-inculcated in the TNI's invasion and occupation of East Timor, perpetuating the institutional culture into a new generation.