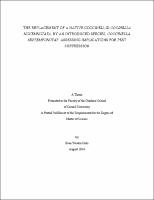 - Chapter 1 While the importation and release of foreign natural enemies in classical biological control programs can be cost-effective, the released control agent can have unintended effects, such as the displacement of native natural enemies. In this study we examined the effect of the replacement of a native coccinellid, the nine-spotted lady beetle (Coccinella novemnotata) by an exotic biological control agent, the seven-spotted lady beetle (C. septempunctata), on the ability of the coccinellid complex to control pest aphids. Specifically, we compared the consumptive and non-consumptive effect of each coccinellid species on aphids. The consumptive effect was measured by determining the functional responses for each lady beetle and calculating attack rate, handling time, and maximum feeding rate on a shared prey item, the pea aphid (Acyrthosiphon pisum) Non-consumptive effects were examined by assessing pea aphid dropping rates in response to foraging by the coccinellids on fava bean plants. Our results indicate that C. septempunctata has both a significantly greater consumptive effect and non-consumptive effect on A. pisum than C. novemnotata. Modeling indicates that C. septempunctata should have a greater impact on A. pisum populations but that its greater predatory efficiency could also lead to decreased stability in the interactions between predator and prey populations. Abstract - Chapter 2 Numerous biological control programs within the United States have used coccinellids to control soft-bodied insect pests. While many of these programs have been successful, the importation of foreign natural enemies can have unintended effects on native species. In this study we focus on the exotic natural enemy, the seven-spotted ladybeetle (Coccinella septempunctata) and the displaced native, the nine-spotted ladybeetle (C. novemnotata). Specifically, we examined how the presence of a conspecific or heterospecific adult beetle and the density of aphid prey affected foraging behavior. In addition we determined if olfactory cues from aphids or fava bean plants (Vicia faba) played a role in foraging decisions for these two species. Our results indicate that C. novemnotata was strongly affected by C. septempunctata presence when foraging and less affected by conspecifics, whereas C. septempunctata avoided both heterospecifics and conspecifics equally. The effect of aphid density affected both species differently with C. septempunctata having a lower retention time on an infested pea plants than C. novemnotata at the lowest aphid density. Using a Y-tube olfactometer, we found no effect of aphid or plant olfactory cues being utilized by either C. novemnotata or C. septempunctata.