To Harm And Be Harmed: Agency And The Perception Of Moral Events 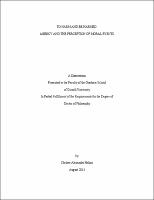 When individuals tell stories from their own lives, they do so by constructing and interpreting these stories in a way that places them within the overarching structure of their moral values. Though preserving one's moral identity as a "good person" is an important goal, individuals often act in ways that are self-serving or cause harm to others. One way that individuals maintain a positive moral identity following immoral behaviors may be to dampen down their ascriptions of their own intentionality for said behaviors-thus aligning one's memories for the event with one's moral code. Across eight studies, I find that this alignment process leads to predictable biases in both event perception and autobiographical memory. In studies 1 and 2, I show that immoral events are construed at a higher level than non-moral events, and that immoral behaviors that individuals have performed themselves are construed at a lower level than immoral behaviors that they have not. The final five studies examine the perception of moral events through the structure of the moral dyad, which posits that moral situations are comprised of "agents" (those with the capacity to harm others) and "patients" (those who are harmed as a result the agent's actions). Study 3 provides evidence that individuals are better able to recall moral patient events than moral agent events. Studies 4 through 6 examine the processes underlying this effect, and find that both event negativity and perceived intentionality impact memory recall for moral events. Studies 7 and 8 test a proposed mechanism for this effect: that agency increases feelings of psychological completeness for moral events