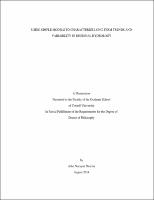 The three studies presented here demonstrate the utility of simple models in identifying long-term trends and variability in regional hydrology. In the first study, three new methods were used to identify the start and end of the rainy season in India. By applying these methods for data from 1951 to 2007, it was found that over much of India, the rainy season appears to have been shifting earlier. In the second study, Gravity Recovery and Climate Experiment (GRACE) satellite data were used to parameterize a simple water balance model. The model showed that evapotranspiration and storage in the Missouri River Basin have increased between 1928 and 2012. The results are consistent with the hypothesis of increasing temperatures causing the acceleration of the hydrological cycle. The third study shows that persistence patterns in precipitation, temperature, potential evapotranspiration and a drought index can be modeled using autoregressive processes where the sum of the coefficients equals 1. The results show that particular degrees of persistence are not dependent on any particular pattern of autoregression. These methods are particularly well suited to characterizing long term hydrological trends in places where there are only basic weather and streamflow data.