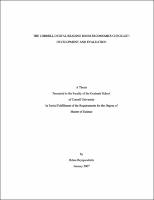 Currently there exists no strategy for evaluating digital radiology reading rooms. This is of concern since the number of symptomatic radiologists suffering from work related musculoskeletal problems seems to be on the rise. Work related musculoskeletal complaints have been shown to be related to workstation set up, chair settings, monitor placement and other issues related to the computer workstation. Due to the visually intensive nature of the work of radiologists working with digital medical images, it is also important to look at factors in the ambient environment, such as lighting. A checklist was developed to evaluate environmental factors in the work environment of radiologists. The checklist contained 39 questions divided into sections on display screens, input devices, workstation and workstation accessories, chair and ambient conditions. The items in the checklist were taken from checklists and educational material published for example by independent researchers, the Occupational Health and Safety Administration (OSHA) and the Canadian Standards Association. Answer options for each item consisted of factual statements, measurements, rating or a simple description. Some answer options included images for postural comparison. The checklist was not accompanied by a scoring sheet, but items that, if answered in a particular way, could be classified as ?Ergonomic Issues? were identified in the checklist instructions and layout. To evaluate the checklist, a mailing survey was sent to practicing radiologists, hospital administrators, ergonomists and other health and safety professionals. In the survey, respondents were asked four questions, both open ended and closed-ended, relating to the usability, layout and overall comprehensiveness of the checklist. The experts were also encouraged to provide general comments on the checklist. Twelve non-factual items or items that required rating or subjective scoring were tested with multiple rater agreement (interrater reliability) and by percent agreement between participants and between participants and an ergonomist. The individual items were tested by asking participants to base their answers based on a series of standardized images depicting a model radiologist performing various tasks, such as reading an image from a computer monitor, use a computer mouse and telephone. Twenty one participants, aged 18-58 years old completed the Interrater reliability - Individual Item Test. Six were male and 15 female. Eight participants were experts, or had background in ergonomics, facility planning and management or similar human-environment relations fields. The Interrater reliability of the items tested was .50 (p< 0.05) for the experts, and 0.10 for the novices (p<0.05). When the results of participant agreement for individual items were analyzed, four items had consistently lower agreement. Three of these items were modified in accordance with expert feedback and one was excluded from the final version of the checklist. The final version of the checklist contained 43 items. Limitations to this study include the design of the individual item test, not utilizing realistic situation with participants actually observing a radiologist at work, but basing their ratings off images that were not consistent in terms of posture and content. Further limitations also include the limited number of expert feedback received. In spite of the idea that invested experts would provide good feedback, it would prove beneficial to know why some experts chose not to participate. Future research directions include a more comprehensive test of the checklist, both including the entire checklist as well as testing the checklist in actual digital reading rooms. An interesting application of this type of environmental checklist is to adapt it for computer based use, utilizing either portable hospital computer workstations or palm pilots would enable synchronization of information in a centralized facility database as well as instant access to results and possibly feedback. It would be very interesting to see an interactive version of this checklist developed and tested in the future. This is particularly relevant with hospital environments becoming increasingly a digital workplace.