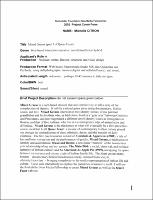 Mixed Greens is a web-based artwork that uses interactivity to tell a story of the complexities of identity. It will be a mixed genre piece using documentary, fiction, sound, and text. Mixed Greens interweaves two identity stories: of my paternal grandfather and his brothers who, as Irish Jews, lived in a "gray area" between Catholics and Protestants, and later negotiated a different set of identity issues as immigrants in Boston; and that of five lesbians, who live at a contemporary edge of assimilation and difference. Mixed Greens is the third piece in what will eventually be a five-piece/fivecourse meal that I call Queer Feast: a mosaic of contemporary lesbian culture played out through its contradictions of class, ethnicity, desire, and the banality of daily existence. The five pieces/courses consist of: Cocktails & Appetizers (2001), a tale of lust and love, voyeurism and the performance of gender; Mixed Greens, a meditation on identity and assimilation; Bread and Butter, a non-linear "memoir" of the twenty-four year relationship of me and my partner; The Main Dish, a social, historical, and political narrative of lesbian culture; and As American As Apple Pie (1999), occupying the space between melodrama and sitcom, a tale of lesbian family life. This feast crosses many borders - documentary/fiction/melodrama/comedy, memoir/history/myth, ethnicity/race/class - bringing complexity to the media representation of lesbian life and culture. It also uses interactivity to explore the paradoxes of narrative itself. I will use the Rockefeller New Media Fellowship to create Mixed Greens as well as the Queer Feast web site.