An Investigation of Microclimatological Conditions Along Elevation Transects Near Ithaca, NY 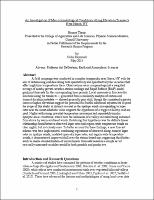 A field campaign was conducted in complex topography near Ithaca, NY with the aim of determining and describing both qualitatively and quantitatively the variables that affect nighttime temperatures there. Observations were compared against a weighted average of nearby private-weather-station readings and Rapid Refresh [RAP]-model gridpoint forecasts for the corresponding time periods. Local nowcasts or forecasts for locations along the transects — generated from a similarity analysis of station and transect-location metadata — showed generally poor skill, though the consistently greater errors at higher elevations suggest the potential for fruitful additional adjustments beyond the scope of this study. A distinct reversal in the upslope wind corresponding to lapse rates near the moist-adiabatic value supports the hypothesis of a triggered hilltop cold-air pool. Nights with strong potential-temperature inversions had remarkably similar synoptic-scale conditions, which bore the hallmarks of a valley inversion being entrained from above by warm southeast winds. Bolstering this hypothesis was the definite linear relationship found between observed lapse rates and region-wide temperature trends on clear nights, but not cloudy ones. To better account for these findings, a new forecast scheme was then implemented, combining regressions of observed along-transect lapse rates on upslope winds, modeled open-sky lapse rates, and region-wide temperature trends; it demonstrated improved skill over the station-based one, suggesting that further work to enable standardization of microclimatic forecasts based on a simple set of externally measured variables would be both possible and productive.