Celebrating a Life: Roger Spanswick
JavaScript is disabled for your browser. Some features of this site may not work without it. 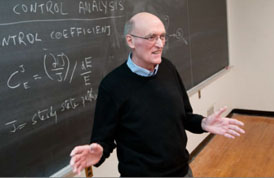 On June 2, 2014, the Biological and Environmental Engineering Department’s Symposium, entitled as above, honored multiple aspects of the legacy of Roger Spanswick (1939–2014).

Roger, born in Barford St. Michael, Oxfordshire, England, achieved an Honors Degree in Physics from Birmingham University in 1960. He graduated with a Ph.D. in Biophysics from the University of Edinburgh in 1964. Roger met his wife, Helen, in Edinburgh and they married in 1963. Roger was a post-doc in Plant Biophysics from 1964 to 1967 at Cambridge University under Enid MacRobbie. Roger was on the faculty of Cornell University from 1967 until his death in 2014, most recently in the Department of Biological and Environmental Engineering. Over his career, Roger had 14 graduate students and 14 post-doctoral students in his lab, all focusing their research on aspects of membrane transport processes in plants. Roger and Helen have two sons, Andrew and Robert, and three grandchildren, Zoe, Colin, and Tom.

Enid MacRobbie characterized Roger Spanswick’s scientific legacy as follows: “Roger made major contributions to our understanding of basic ion transport processes in plants, and was a true pioneer. He was both a very original thinker and a very versatile, thorough and careful experimentalist. He initiated a revolution in our understanding of ion transport in plant cells. His demonstration (in 1972) that the most important transport system in the plasmalemma of Characean cells is a proton-pumping ATPase, generating membrane potentials well negative of the potassium equilibrium potential, was a major advance… Previously plant physiologists had assumed that plant cells were like animal cells, with an ATP-dependent sodium-potassium exchange pump as the major process of active ion transport. There was opposition to this new view, but by the time of his review in the 1981 Annual Reviews of Plant Physiology further experimental work made it clear that he was right. In the period of the 1970s and 1980s he continued to make major contributions to the new thinking. He showed that two distinct proton pumping ATPases were present in plasmalemma and tonoplast, with different inhibitor characteristics. He also showed that the gradients of pH and membrane potential generated by the primary proton pump in the plasmalemma could be used to drive secondary active transport of other solutes, sugars, amino acids and other ions. Thus his original idea led to a very large volume of experimental work, in which he also had a major input, and the consequence was a revolution in the field. He later went on to work successfully on more applied problems over a wide range of topics, but it is important to recognize the lasting legacy of his work in the field of basic ion transport.”

Science and other aspects of Roger’s legacy and his impact were discussed at the Symposium.

Click on the ‘Title’ button below for a listing of the symposium videos. Select a title, then click the ‘streaming’ file choice.