Tradition And Invention In The Music Of Henri Dutilleux 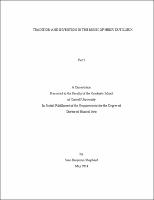 This study of the music of Henri Dutilleux (1916-2013) tracks a subtle trajectory: that of a composer whose lengthy career of slow, careful innovation was both tempered and informed by a firm grounding in the musical traditions of Europe, and of his native France. His approach resulted in a modest but exquisite body of work. By viewing his work through varied lenses and in different contexts, one aims to describe that approach, and eventually to contend with questions of his musical style. By inferring a larger linearity of language between the music of this period and his later work, the first part, ending with the Second Symphony of the late 1950s, challenges the view of the young composer as unoriginal and derivative. The second part is a detailed view of his explorations in form, harmony and narrative in two pieces from the 1970's: Sur une meme accord, a short prelude for piano, and the string quartet Ainsi la nuit. By viewing the first piece as preparation for the second, his major chamber work, in the context of a workshop setting, we see the impact of Proust's influential ideas take musical shape. A view of his progression and developments on the orchestral plane, the final part is primarily concerned with two works from the 1970s: the cello concerto Tout un monde lointain…," and Timbres, espace, mouvement for orchestra. By articulating the change from a closed-form design to one of self-reference and interconnectivity, this study observes the changes in his musical language that continued through his mature work.