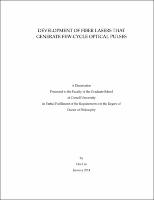 The advantage of fiber lasers is self-evident. Fiber is relatively low cost, flexible for compact design, has a large surface area to volume ratio for efficient heat dissipation, is alignment free, and provides good spatial beam quality due to its properties as a waveguide. It can be highly user friendly due to the minimum maintenance and much lower cost. The performance increases in fiber lasers have allowed them to reach applications in the fields of manufacturing with lasing machining, multi-photon biological imaging, and laser surgery. Moreover, fiber laser has rich nonlinearity so it provides a good play ground for nonlinear phenomena study, such as Rogue waves. Before 5 years ago, fiber laser had been dominated by soliton lasers [47] [9], which gives good performance for solid state laser but has limited performance for fiber lasers due to the accumulated large nonlinear phase due from strong confined wave propagation within the small core of the fiber and relative large local dispersion to generate short pulses according to the area theorem. The ordinary soliton fiber laser has limited pulse energy of 0.1 nJ. For dispersion managed (DM) soliton fiber lasers, although the nonlinearity could be controlled to some extend by temporal pulse broadening inside the cavity, which results an order of magnitude increase of energy, it is still hard for fiber laser to compete with solid state lasers in energy. Recent developments in the field of fiber lasers over the past five years , particularly the dissipative soliton lasers at nor- mal dispersion regime [1] showed a different nonlinear solution which does not constrained by soliton area theorem, have enabled fiber lasers to compete with solid state lasers in terms of energy around 100 fs regime. To compete with solid state lasers, fiber lasers also must be able to achieve short pulses down to a few cycles. Solid state gain media have gain bandwidths of hundreds of nanometers while the bandwidth of doped fiber is around 40 nm, which fundamentally limits the shortest pulses available from fiber source based on commonly used mode locking mechanisms. Since the gain will act like a filter to limit the possible average cavity solution both both soliton and dissipative soliton lasers. Another difficulty is the relative large net dispersion of fiber lasers compared with solid state lasers, which starts to place additional limits on the pulse durations below 100 fs. Although 100 fs pulses can be routinely generated from fiber lasers, pulses as short as a few cycles are harder to stabilize than in solid state lasers. Over the past few decades, fiber lasers were typically made with Er-doped fiber and later with Yb-doped fiber. Tm fiber lasers have drawn people s attention due to its potential applications for high harmonic generation, mid-IR pumping source and many other areas. In this thesis, fiber lasers with different gain medium, Erbium, Ytterbium and Thulium, will be presented with the effort of generating short pulses through the use of different mode locking mechanisms. The extended self-similar propagation, which is different from previous average cavity analysis, will be introduced as a route to few cycle pulse generation. Pulses as short a 6 cycles have been generated for both Yb and Er lasers. The extended self-similar propagation can occur in either a piece of highly nonlinear fiber through passive self-similar propagation of parabolic pulses in normal dispersion fiber or through a segment of dispersion decreasing fiber, which has a mathematical analogy to self- similar propagation in a gain fiber. The design guide for this type of cavity will be given, and energy scaling of this cavity with large core fibers will be discussed.