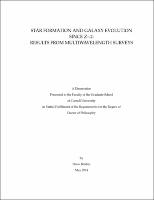 Our recent studies in galaxy evolution have revealed a surprising new paradigm of star formation. Contrary to the notion that major mergers play an increasingly dominant role going backwards in cosmic history, we find that over the last ~10 Gyr, much of star formation has been fueled by accreting cold gas from the cosmic web. Accretion rates were presumably larger in the past, so star forming systems may have very different properties in the early Universe and today. Large scale astronomical surveys, such as the Herschel Multi-Tiered Extragalactic Survey (HerMES), and the Sloan Digital Sky Survey (SDSS) have provided a wealth of extragalactic data covering a statistically large number of sources. Targeted, niche surveys, like our fine structure line survey of star forming galaxies in the early Universe observed with the redshift (z) Early Universe Spectrometer (ZEUS) have provided detailed observations of high interest sources. We have made use of this diverse set of data to study galaxy evolution from the epoch of peak star formation at z=1-2 up to the present. Data from HerMES is a reliable probe of infrared emission, particularly useful for characterizing the far infrared dust peak, and therefore determining star formation rates out to redshifts of a few. Deep integrations with the Herschel SPIRE photometer rapidly reach the confusion limit, tempering its utility in studying faint high redshift galaxies. With appropriate care taken to identify blended sources, however, HerMES data is useful in identifying bright, red- shifted, star forming sources. We have compiled spectral energy distributions from HerMES and ancillary data and found that, even sources at high redshift are well fit by local star forming galaxy templates. In the local Universe, spectroscopic SDSS data has allowed us to estimate crucial galaxy properties on ~105 sources, providing an opportunity to observe general statistical trends, and constrain theories of galaxy evolution. A toy model of cold flow accretion powered star formation reproduces the observed fundamental plane of galaxy stellar mass, metallicity, and star formation for small and medium mass galaxies. Our fine structure line survey with ZEUS detected the [CII] 157.7 [MICRO SIGN]m line in eight galaxies from the epoch of peak star formation at z=1-2. We augmented this survey with observations of the [OI] 63 [MICRO SIGN]m line and far infrared photometry from Herschel, as well as Spitzer IRS spectra from the literature. Most of our sources have higher than average gas heating efficiency with L[CII] /LF IR 10[-]2 . We interpret the majority of them as being dominated by star formation powered PDRs, extending to kpc scales. In two sources there is evidence for enhanced [CII] emission due to heating by low velocity shocks. These findings are consistent with a picture of gas accretion fueling star formation on a near galaxy-wide scale. In synthesizing this data we find a remarkable consistency in the nature of star formation over the last 10 Gyr. In contrast with the model of sustained hierarchical merging, we find that star formation since z~2 is fueled largely by cold flow accretion of gas from the cosmic web, which presents itself as moderate density star formation with correspondingly moderate UV fields.