Managing Species Of Conservation Need In The Face Of Climate Change: A Landscape And Trait-Based Approach 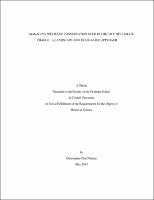