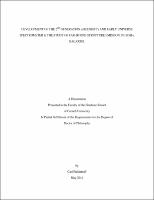 The 2nd generation z (Redshift) and Early Universe Spectrometer (ZEUS-2), is a longslit echelle-grating spectrometer (R~1000) for observations at submillimeter wavelengths from 200 to 850 [mu]m. Its design is optimized for the detection of redshifted far-infrared spectral lines from galaxies in the early universe. Combining exquisite sensitivity, broad wavelength coverage, and large (~2.5%) instantaneous bandwidth, ZEUS-2 is uniquely suited for studying galaxies between z~0.2 and 5-spanning the peaks in both the star formation rate and number of AGN in the universe. ZEUS-2 saw first light at the Caltech Submillimeter Observatory (CSO) in the Spring of 2012 and was commissioned on the Atacama Pathfinder Experiment (APEX) in November 2012. Here we detail the design and performance of ZEUS-2, first however we discuss important science results that are examples of the science enabled by ZEUS-2 Using the first generation z (Redshift) and Early Universe Spectrometer (ZEUS-1) we made the first high-z detections of the [NII] 122 [mu]m and [OIII] 88 [mu]m lines. We detect these lines from starburst galaxies between z ~2.5 and 4 demonstrating the utility of these lines for characterizing the properties of early galaxies. Specifically we are able to determine the most massive star still on the main sequence, the number of those stars and a lower limit on the mass of ionized gas in the source. Next we present ZEUS-2's first science result. Using ZEUS-2 on APEX we have detected the [CII] 158 [MICRO SIGN]m line from the z = 1.78 galaxy H-ATLAS J091043.1-000322 with a line flux of (6.44 ± 0.42) x 10-18 W m-2. Combined with its far-infrared luminosity and a new Herschel-PACS detection of the [OI] 63 [MICRO SIGN]m line we are able to conclude that H-ATLAS J091043.1-000322 is a high redshift analogue of a local ultra-luminous infrared galaxy, i.e. it is likely the site of a compact starburst due to a major merger. This detection, combined with the ZEUS-1 observations of the [NII] and [OIII] lines represent examples of work we plan to continue with ZEUS-2. As such, they demonstrate the potential of ZEUS-2 for increasing our understanding of galaxies and galaxy evolution over cosmic time.