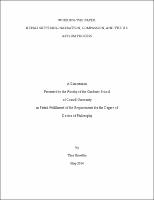 This ethnography documents the interconnections between asylum narrations and emergent Nepali migrant-community in the United States within the context of contemporary US immigration and political asylum process. It explores the social and politico-legal life of asylum narration, interpretation, and documentation that congeal the figure of a "suffering migrant" and/as an "asylum seeker" in the United States. The multifaceted elements involved in the asylum process-from initial stages of interpretation and documentation, including filing of the I-589 asylum application to the US state, recording of individual asylum narratives to the preparation of affidavits and expert-witness reports to the effective deployment of suffering accounts in the courtroom hearings-frame specific chapters in this dissertation. This dissertation reveals that the socio-cultural work of and investment into asylum process extends beyond the legal realm that they are often consigned to. I examine how the characteristics involved in seeking political   asylum, including legal documentation and bureaucracy come to define the relationship, sociality, and imaginations in the formation of Nepali migrant communities in the United States. For Nepali transnational migrants and/as asylum claimants explain and self-reflexively critique the asylum-seeking process through the socio-cultural concepts of kaagaz banaune (literally, "making paper"), or legal documentation, and the everyday practice of dukkha, or suffering, being inseparable from socio-legal dynamics, emphasizing the basis for creating a peculiar mode of sociality and negotiating familiar ones anew. I ground these interests within the co-construction of what I call asylum "suffering narratives" by Nepalis, embedded in indeterminacy, intersubjective and political possibilities, which both contest and conform to their interlocutors'-asylum lawyers and human rights advocates-interpretation of the "work of compassion" as a hallmark of the US asylum system. An analysis of the US asylum-seeking process as a paradigmatic case for the production of a "suffering narrative," my dissertation takes into account how and in what specific ways asylum legal experts in turn employ, embody, and self-consciously reproduce rationales within the state-legitimized constraints and their practices-conflicting and sometimes inconsistent views, critiques, and beliefs-of compassion as an important extension of the everyday practice and performance of membership in a liberal, democratic state.   Nepalis' experiences of seeking asylum illuminate the infrequently explored workings of liberal subject making where individuals and migrantcommunity in question do not unconsciously reproduce suffering narratives without incisive internal critique of the process. Exploring the dynamics of suffering and victimhood as a necessary condition to the modern, subject making process, I argue that, contrary to the prevailing trend, the politics of recognition cannot be seen as an end for putative pathway toward citizenship in liberal democracies, empirically and theoretically. Rather, it is the beginning of a more complicated relationship between private-citizens and the making and managing of legal non-citizens. It shows that social and political suffering, both as a general phenomenon and in the context of political asylum offer a useful analytical site for an investigation into the relationship between compassion, suffering, and citizenship.