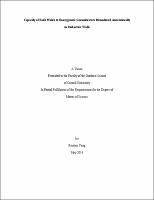 Chlorinated solvents, such as tetrachloroethene (PCE) and trichloroethene (TCE), are regarded as major contaminants in groundwater, and multiple technologies have been developed to remediate them. Among these, bioremediation via anaerobic reductive dechlorination has received the most attention. One method for applying it to dilute contaminant plumes is via installation of a Permeable Reactive Barrier (PRB), a permeable wall, perpendicular to groundwater flow, within which the anaerobic reductive dechlorination process occurs to remediate chloroethenes reaching it. The PRB is constructed of a slowly degradable, particulate organic material such as pine-bark mulch. The reductive dechlorination process requires a highly reducing environment (anaerobic condition). Consequently, the reactive barrier must be able to remove dissolved oxygen from the plume as the groundwater reaches the wall, and establish a suitable anaerobic condition within the wall to support the desired, reductive processes. In fact, the amount of electron donor needed to remove several milligrams per liter of oxygen is going to be far greater than the amount of electron donor needed to support the reductive dechlorination of ppb levels of chlorinated ethenes. The overall purpose of this research was to explore the capacity of mulch (pine bark) to serve as electron donor to sustain aerobic microbes in the removal of oxygen from groundwaters flowing to a biobarrier wall intended for anaerobic reductive dechlorination. Bottle studies were conducted over 110 days with different amounts of mulch, and under different conditions of inoculation, nutrient addition, and liquid exchange (to simulate leaching). The following conclusions were reached: (1) Inoculation with KB1®,   iii   a Dehalococcoides-containing mixed culture commonly used for bioaugmentation at sites intended for anaerobic bioremediation, made no difference in initiating O2 consumption in mulch; (2) the oxygen-consuming capacity of mulch was estimated to be 31.2 mg O2 per gram (dry wt.); (3) liquid exchange had no effect on cumulative O2 consumption, suggesting that leaching of electron donor was not significant; and (4) supplementation with nitrogen (as ammonium) and phosphorus (as orthophosphate) had a mixed - and therefore uncertain -- effect on rate of oxygen uptake by pine bark mulch.   iv