Structure And Rheology Of Cubic Particles In Suspensions 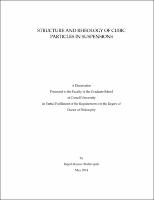 It is well known that the shape of particles is an important factor that determines the fluid flow behavior of suspensions. Interactions of cubic particles with one another and with the flow medium are unique because of their sharp edges, corners and flat surfaces. Using theory, simulations and experiments, the structure and flow properties of cube-shaped particles in suspension over a range of volume fractions is studied to understand the effect of shape on fluid structure and rheology. At very low volume fractions, the sharp edges and corners of cubes are found to profoundly alter the velocity field around the cube.The stresslet-strain relationship for a cube is anisotropic and depends on the orientation of the cube with respect to the velocity flow field. The effective viscosity of the suspension in a simple shear flow is obtained by computing the orientationaly averaged stresslet acting on cubes. These calculations yield a universal intrinsic viscosity, [[eta]] = 3.1 for sharp cubes, which is higher than the corresponding value for spheres [[eta]] = 5/2. Using the 2D velocity flow profile around sharp corners we further find that the pressure becomes singular near the edges of the cube, which results in the increased value of stress and hence the higher viscosity when compared with spherical particles. In the presence of an external torque acting on each cube, the orientation distribution is no longer isotropic. This can be achieved by using magnetic cubes in magnetic field. The general expression for the stress in a suspension of mag- netic cubes subjected to linear velocity field in presence of an external magnetic field is calculated. We find that the intrinsic viscosity for the weakly Brownian suspension in a simple shear flow can be varied between [[eta]] = 3.25 to [[eta]] = 5.5 by changing the strength and the direction of the applied magnetic field. At low to moderate volume fractions, Brownian dynamics simulations were carried out to study the structure and flow behavior of suspensions. Simulations were performed over a wide range of volume fractions and Pe to study its rheological properties. Our equilibrium results show that cubic particles behave like spheres interacting with a soft repulsion potential function for volume fractions less than 0.25. This soft repulsion potential captures the orientationally averaged excluded volume of the cubes and produces identical probability distributions as that of for cubes at very low volume fractions. For higher volume fractions, cubic particles starts to lose their orientational freedom resulting in the deviation of equilibrium properties from that of soft spheres. We also found that suspension of cubic particles when subjected to simple shear will produce higher viscosity when compared with spherical particles in suspensions with equivalent volume. We show that the suspension rheology in this regime can be discussed in terms of ordering and collisions among hard cubic particles. In order to gain insights from experiments, cubic particles of varying sizes (10nm to 5 micron sized cubes) and chemistries (PbT e,Fe3 O4 and MnCO3 ) were synthesized. Polymer brushes were also attached on the surfaces of PbT e and Fe3 O4 nanocubes to characterize the effect of particle surface chemistry on flow behavior. MnCO3 spherical particles of similar sizes as that of MnCO3 cubes were also synthesized and their suspension behavior studied to empirically characterize the effects of shape. A key result from this study is that irrespective of the cube size, size distribution, and surface chemistry, the intrinsic viscosity([[eta]]) for cube-shaped particles is [[eta]] = 3.1 ± 0.2 which agrees well with the value estimated from theory.