Effects Of Total Shoulder Arthroplasty On Glenohumeral Kinematics And Mechanics 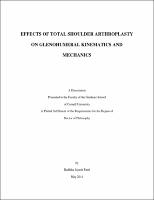 Glenoid component loosening is the primary reason for failure after a total shoulder arthroplasty (TSA) accounting for 32% of complications post-surgery. The design of the glenoid implant, specifically the degree of conformity or radial mismatch between the bearing surface of the glenoid and humeral components, allows for posterior translation and has been shown to affect glenoid loosening. Existing theories for the failure mechanism are conflicting, suggesting that failure occurs in the bone, cement, or interface, with no agreement on the mechanism that causes glenoid loosening. The focus of this thesis is to obtain a fundamental understanding of glenohumeral joint translations and load transfer in the bone-implant system after a TSA. First, we studied the posterior glenohumeral translations observed clinically using a six degree of freedom computational model of the shoulder. We found that posterior translation increased as a function of radial mismatch, and the increase in posterior translation was explained by the increase in force in the infraspinatus muscle. Secondly, using a finite element model of the healthy scapula, we determined that after a cemented TSA, stress shielding was possible because load bypassed the cancellous bone region and was transferred directly to the stiff cortical bone when the implant pegs were present. Additionally, the cement was more likely to failure during eccentric and high magnitude loading. Finally, using finite element models of an osteoarthritic scapula, we showed that stress shielding and cement failure was more likely in the corrected osteoarthritic glenoid compared to the healthy and retroverted osteoarthritic glenoids during eccentric loading. These findings question the common surgical practice of correcting for glenoid retroversion prior to reconstruction. Furthermore, the reconstructed osteoarthritic glenoid was less sensitive to peg length than the healthy glenoid demonstrating that shorter pegs, requiring less bone resection, may be used in osteoarthritic patients.