At The Censor Interface: The Thai Television Lakorn, Its Spectators And Policing Bodies 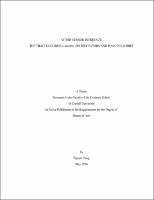 My thesis investigates six cases of censorship of the television lakorn, Thailand's version of the soap opera, from 2005 to the present. The primetime lakorn is consistently being watched by a quarter to a third of the nation, making it the programming with the farthest reach. These cases of censorship contend with issues of queer visibility, feminine desires, gender roles, family values, political authority, and corruption. I explore the censorship of lakorn as operating at an interface because it does not adhere to the rhetoric of censorship as the strict state prohibition of certain images and discourses pre-coded in official policies. The Thai state is neither the initiator nor authoritative decision-maker in these acts of censoring. Lakorn censorship is instead a process in which the interface serves as a physical and virtual space of interaction, mediation and negotiation. This process is ongoing since it does not begin nor cease with an external decision from a state board of censors and conditional since it depends on a substantial public reaction. My study does not disregard the role of the state; rather it problematizes the extent and nature of that role and its inconsistencies. While the state never initiates censorship, it is always involved and implicated in varying extents. Lakorn censorship does not confirm the existence of a monolithic Thai state with the exclusive right to control broadcasting, but rather a state in conversation with others. Thus, the censor interface serves as a discursive site where interest groups, state bodies, channel executives and concerned individuals encounter each another to discuss, debate, and deliberate a wide range of pertinent issues. My thesis is a study of contemporary Thai popular culture in motion. Due to its mainstream appeal and soap genre conventions, the lakorn is the medium capable of breaching the fantasy/reality and public/private divides. Censorship is the lens through which to examine the dynamic relationship between the institution of law, lawmakers and citizens. Finally, lakorn spectators, both fanatics and critics, are the drivers of cultural change through their participation at the censor interface.