The Effectiveness Of Market Development Programs For U.S. Dairy Products 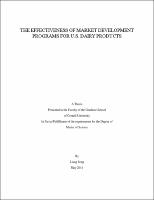 This study examines the effectiveness of U.S. dairy export promotion programs on increasing foreign demand and enhancing producers' revenues. The analysis is based on two econometric models. An import demand equation based on panel data is derived to measure the responsiveness of U.S. dairy import demand in various countries to dairy export promotion. The Armington model is adopted to analyze both the short-run and long-run promotion effects on the market share. Then, the import demand model is used to simulate several in-sample scenarios involving alternative funding levels for export promotion to calculate average and marginal benefit-cost ratios for the programs. The results of this study indicate that the market development programs have increased the demand for U.S. dairy products in the foreign markets over the years, and they have generated an impressive positive return to producers for each dollar spent on promotion. It appears that market development programs were underfunded from a producer-welfare perspective unless the marginal rate of return on alternative uses of promotion was high.