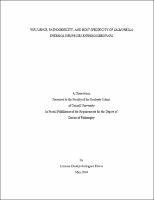 Salmonella is a gram-negative zoonotic foodborne pathogen and the etiologic agent of salmonellosis. Estimates indicate that nontyphoidal Salmonella is the leading bacterial cause of domestically acquired foodborne illnesses, hospitalizations, and deaths in the U.S. each year. This pathogen is known to have an extensive repertoire of virulence genes, and the disease severity could vary depending on the host and the bacterial strain. The studies presented herein were aimed at characterizing Salmonella serovars from different sources using phenotypic, genotypic and next generation sequencing approaches. Specifically, this work focuses on: (i) the diversity of Salmonella subtypes from subclinical dairy cattle and farm environments, (ii) the genomic features of Salmonella Cerro, the most commonly isolated serovar from the farms studied here, and (iii) the typhoid toxin (CdtB), a virulence factor encoded in a genomic islet in nontyphoidal Salmonella serovars, and its effects on the cell cycle of human epithelial cells (Henle-407). Our data suggest that subclinical livestock and farm environments may represent important reservoirs of Salmonella serovars and subtypes associated with human infections, including MDR Salmonella. Interestingly, serovars that are rare among human clinical cases were found in subclinically infected cattle and farm environments (e.g., Salmonella Cerro). Our comparative and population genomic analyses of 27 Salmonella Cerro genomes revealed that the increase in prevalence of this serovar in dairy cattle is caused by a highly clonal subpopulation which represent sequence type ST367. Furthermore, genomic deletions in Salmonella Cerro ST367 may indicate adaptation to specific ecological niches and possibly reduced virulence in some hosts. Finally, we showed that the nontyphoidal CdtB is closely related to the Salmonella Typhi CdtB and also has a possible role in host-pathogen interaction since Henle-407 cells infected with wild type strains displayed arrest in G2/M, while cells infected with the isogenic mutants for cdtB did not. Altogether, these studies contribute to our current understanding of: (i) Salmonella serovars and subtypes associated with subclinical hosts and farm environments (ii) genomic factors that may contribute to nontyphoidal Salmonella adaptation to certain hosts, and (iii) virulence factors, specifically the typhoid toxin CdtB, and its role in the pathogenesis of nontyphoidal Salmonella serovars.