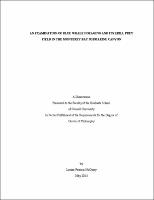 The purpose of this study is to advance the application of hydroacoustic techniques in the study of marine ecosystems. In the Monterey Bay Submarine Canyon on the coast of California, USA, 120 kHz and 200 kHz hydroacoustic data was collected with scientific echosounders. Zooplankton specimens were collected using MOCNESS stratified net tows from the strongly scattering krill sound-scattering layer (SSL). A suite of zooplankton scattering models were used to predict the backscatter expected from the specimens collected in the nets. The results of this work demonstrate that the backscatter from rare and inconspicuous but strongly scattering gas-bearing siphonophores can dominate the backscatter observed from the soundscattering layers dominated by krill biomass. Failure to account for the contribution to observed backscatter by the gas-bearing siphonophores will results in overestimates of acoustic-derived euphausiid abundance and the nutritional quality of these krill soundscattering layers. Blue whales, the largest animal on the planet, feed on the krill aggregations found to coincide with the SSLs adjacent to the walls of the Monterey Bay Submarine Canyon. In this study the foraging-dives of a blue whale were tracked and its krill prey-field was remotely sensed using hydroacoustic techniques. The foraging behavior of the whale as it searched and exploited the krill SSL was examined in the context of its krill prey-field, and the foraging efficiency achieved by the whale was estimated. The results of this study suggest that the search behavior of the whale is consistent with behavior that theory predicts would optimize their encounter rate with krill patches of sufficiently high prey density. The results also provide compelling evidence that within the foraging habitat, the whale focused its foraging effort in a discrete high-density patch where the achievable foraging efficiency was an order of magnitude greater than in other regions tested and rejected by the whale.