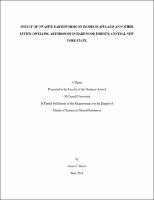 Invasive earthworms alter the structure of soils in northern hardwood forests, but the quantitative impacts on litter-dwelling invertebrates are unclear. Litter loss should reduce the habitat space, but nutrient-rich earthworm burrows might provide food resources. We investigated the impact of invasive earthworms on populations of Ixodes scapularis (Blacklegged Ticks), the small mammal community, and other litter-dwelling arthropods to determine the impact of a reduced litter environment. We used five pairs of one-hectare sites (earthworm invaded versus reference) within four contiguous forests in New York State. The presence of earthworms decreased the density of nymphal I. scapularis by 46.1% and larval I. scapluaris by 29.3%. We also observed a dramatic decline in the total abundance of litter-dwelling arthropods with 69.9% of the arthropod population disappearing in the presence of earthworms. Earthworm invasion did not impact small mammal populations. Implications regarding the position Ixodes scapularis within the litter ecosystem are explored.