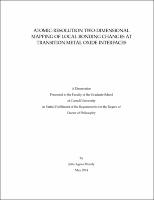 Transition metal oxides exhibit almost every physical state known however electronic changes at polar interfaces between transition metal oxides offer the tantalizing possibility to stabilize further novel ground states. These interface stabalized phases can also cause unintended reconstructions in thin films poised for inclusion in next-generation devices. Here we use scanning transmission electron microscopy (STEM) in conjunction with electron energy loss spectroscopy (EELS) to directly probe with atomic-resolution the charge distribution across transition metal oxide interfaces. We are particularly interested in quantifying the intrinsic electronic reconstructions while maintaining sensitivity to defects at the interface that could obscure the underlying electronic properties. We first investigate LuFe2 O4 , purported to be the highest known ferroelectric ferrimagnet. We demonstrate that the local bonding of the oxygen atoms, incorporated into two distinct sites in the crystal, can be determined and mapped with atomic-resolution. We find no evidence for iron charge-ordering claimed to give rise to the ferroelectricity. We then investigate two similar interfaces between polar and non-polar perovskite oxides, systems that are typically considered with the polar catastrophe model framework. In the case of LaAlO3 /SrTiO3 , we show an exquisite dependence of interface conductivity on the LaAlO3 film composition. Using EELS, we demonstrate that in the case of La-rich films, cation vacancies accumulate at the interface to screen the polarization catastrophe without valence changes. In contrast, the La1[-]x Sr x MnO3 /SrTiO3 system investigated does not show these defect-mediated interfacial screening mechanisms. Rather, we demonstrate a quantitative agreement between interfacial charge transfer present on the manganese sites of the crystal and the polar catastrophe model for x < 0.3, the insulating regime of the phase diagram. Finally, we investigate a related system to the La1[-]x Sr x MnO3 films: ordered superlattices of (LaMnO3 )2n (SrMnO3 )n . Here we show a delocalization of the excess charge on the manganese sites for n [GREATER-THAN OR EQUAL TO] 2 as mapped by EELS spectroscopic imaging. Combined these four systems allow us a unique opportunity to measure electronic properties at oxide interfaces in real space with atomicresolution.