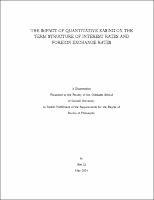 This dissertation estimates the impact of the Federal Reserve' 2008 - 2011 quans titative easing (QE) program on the U.S. term structure of interest rates and USD/JPY exchange rate. We estimate an arbitrage-free term structure model that explicitly includes the quantity impact of the Fed' trades on Treasury mars ket prices. As such, we are able to estimate both the magnitude and duration of the QE price e¤ects. We show that the Fed' QE program a¤ected forward rates s without introducing arbitrage opportunities into the Treasury security markets. Short- to medium- term forward rates were reduced (less than twelve years), but the QE had little if any impact on long-term forward rates. This is in contrast to the Fed' stated intentions for the QE program. We also extend the framework to s analyze the e¤ect of the Fed' QE program on the USD/JPY exchange rate. We s …nd that the Fed' QE accounts for a signi…cant portion of the depreciation of the s dollar during this period. A central monetary authority can a¤ect exchange rates directly by intervening in foreign exchange markets, or indirectly by a¤ecting interest rates. The analysis emphasizes the importance of the latter indirect channel, especially in a period when a central bank undertakes massive bond purchasing activities.