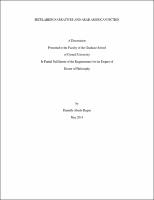 "Secularism Narratives and Arab American Fiction" focuses on contemporary fiction's challenge to the liberal political construction of minority religious practices and community life as incompatible with modernity, progress, and secularism. U.S. secularism is not simply the absence of religion from the public sphere, but is underwritten by a particularly U.S. Protestant conception of religion that has historically shaped assumptions about what it means to be both religious and secular in the United States. Looking to Mohja Kahf, Rabih Alameddine, Ninar Esber, Mouir Fatmi, and Hasan Elahi, I explore immigrant narratives that work outside religious/secular binaries; rather than operating unequivocally within the terms of religious categorizations, contemporary writers often recast those terms and respond to the secularism narrative by scrambling the terms of the religious/secular binary through lived, embodied religious experience. These works dispute the dominant United States narrative of secularism and its claim to be universal and progressive; rather, they reveal how prohibitory secularism enforces an exclusionary citizenry through racialized immigration policies, Islamaphobic political rhetoric and popular culture, and the promotion of specific economic forms and ideologies worldwide. I argue that secularism is entangled with global ideologies of human rights, but also with the particularly United States legal discourses of privacy and property. Moreover, by elucidating the relationship between generic forms and the secular conventions that inform them, I uncover how these texts work to restructure and resist secular narratives of modernization and, by doing so, create the potential for more inclusive secularisms.