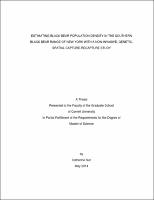 Estimating population density and describing spatial patterns are important in conservation and management of wildlife populations. We conducted a non-invasive, genetic, spatial capture-recapture study of black bears (Ursus americanus) in a region of New York in 2011 and 2012 where its range has expanded in order to 1) estimate population density, 2) test for spatial patterns of range expansion related to landcover, and 3) evaluate patterns of genetic diversity. Estimated population density was 9 bears / 100 km2, low compared to other black bear populations in the U.S. We identified patterns in density and detection probability related to landcover types that differed from expected patterns of resource use. Genetic diversity was comparable to that of non-expanding black bear populations, but we also detected a potential signature of population admixture. In addition, we conducted simulations investigating the effects of different sampling designs on population estimation in large mammal studies. Spatially clustered sampling devices resulted in the most accurate and precise estimates, and performance differences between designs diminished as home range size increased.