Invoking The Past: The Cultural Politics Of Lao Literature. 1941-1975 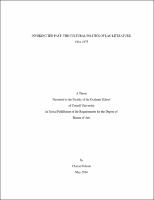 This thesis examines the role of Lao literature in the formation of Lao national identity from 1945 to 1975. In the early 1940s, Lao literary modernity emerged within the specific politico-cultural context of the geopolitical conflict between French Laos and Thailand. As a result, Lao literature and culture became increasingly politicized in colonial cultural policy to counter Thai expansionist nationalism that sought to incorporate Laos into Thai territorial and cultural space. I argue that Lao literature, which was institutionalized by Franco-Lao cultural campaigns between 1941 and 1945, became instrumental to the invention of Lao tradition and served as a way to construct a cultural boundary between Laos and Thailand. Precolonial Lao literature was revitalized as part of Lao national culture; its content and form were also instrumentalized to distinguish Lao identity from that of the Thai. Lao literature was distinguished by the uses of the Lao language, poetic forms, and classical conventions rooted in what was defined as Laos's own literary culture. In addition, Lao prose fiction, which was made possible in Laos with the rise of print capitalism and an emergent literate social class, offered another mode of "invented tradition." Despite its presumed novelty in terms of form and content, early Lao prose fiction was highly conventional in its representation of idealized traditional society in opposition to a problematic modern one. This invention of tradition through fiction was an attempt to contrast a "traditional" Lao nation with the modernized/Westernized Thai nation. Ultimately, Lao literary production between 1941 and 1945 was imbricated with the nativist discourse of a national idealized past that allowed literature to function as a defining feature of Lao culture. This close connection between Lao literature and national culture remained predominant during the post-WW II period in which Lao intellectuals from the colonial continued to employ literature to express Lao cultural identity, autonomy, and legitimacy for an emergent nation state.