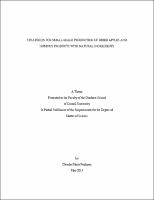 Hummus, a Middle-Eastern legume-based spread, is increasingly popular in the United States, but science-based guidelines to ensure product safety and quality are lacking. Preservatives are used to extend hummus' refrigerated shelf life, but consumers prefer natural alternatives. We evaluated the effect of natural antimicrobials and acid systems 1) on the shelf life of refrigerated hummus and 2) in combination with thermal processing as a hurdle technology to develop a shelf-stable product. Base hummus was prepared by blending chickpeas, olive oil, salt, and water. Hummus was acidified to pH 4.6 with citric acid, citric and acetic acids, glucono-delta-lactone (GDL), or GDL and acetic acid. Five preservative treatments were tested: 20 ppm natamycin, 500 ppm and 1000 ppm natural plant bitters, 1000 ppm potassium sorbate, and no antimicrobial (control). Samples were inoculated with Penicillium, stored at 15°C for 5 weeks (accelerated study), and analyzed weekly for microbial counts. Following the accelerated study, the citric-acetic acid system was validated for storage at 5°C with 20 ppm natamycin, 1000 ppm potassium sorbate, 1000 ppm sodium benzoate, and no antimicrobial at pH 4.6 and 4.2. Samples were inoculated and analyzed as previously described. Over the accelerated study, total plate counts and yeast and mold counts were lowest in citric-acetic acid hummus with natamycin compared to all other samples (p<0.05), with >5 weeks shelf-life. Hummus with GDL or GDL-acetic acid had no significantly different microbial counts (p>0.05) among preservative treatments. During 5°C storage, yeast and mold counts were below the limit of detection (<1 CFU/g hummus) by Week 12 for citric-acetic hummus with natamycin, demonstrating fungicidal activity. Citric-acetic acid hummus with natamycin achieved 22 weeks of refrigerated shelf life at both pH, which was significantly longer (p<0.01) than the other preservative treatments. Hot-packing trials with citric-acetic hummus at pH 4.2 were completed to produce a shelf-stable product. Fill temperatures of 76.7°C, 82.2°C, and 87.8°C were tested with 20 ppm natamycin, 1000 ppm potassium sorbate plus 1000 ppm sodium benzoate, and no antimicrobial. Hummus was inoculated with Penicillium and Aspergillus niger prior to heat treatment. Samples were analyzed post-thermal treatment for initial microbial enumeration. Incubation trials at 35°C were conducted to determine if products were shelf-stable. A shelf-stable citric-acetic hummus at pH 4.2 could be produced if hot-filling at [GREATER-THAN OR EQUAL TO]87.8°C without preservatives. Hot-filling at [GREATER-THAN OR EQUAL TO]82.2°C with natamycin achieved shelf stability, while hot-filling at [GREATER-THAN OR EQUAL TO]76.7°C was adequate with potassium sorbate plus sodium benzoate. These treatments had no mold growth and no significant increase in bacterial counts after the 10-day incubation period. The acceptability of the low-browning apple variety Autumn Crisp in drying applications was investigated to achieve a clean label, minimally processed dried product. Autumn Crisp apples were peeled, cut into wedges, and dried by convective heating without pre-treatments or the use of sulfites. The resultant product was not significantly different in brown color or instrumental texture analysis from a commercial product made with sulfites (p>0.05). A consumer acceptability test was conducted to compare acceptance of the Autumn Crisp product to two commercial products, one with and one without sulfites. Dried apple products made from the Autumn Crisp variety were as acceptable as commercial sulfited products in terms of flavor, texture, color, and overall liking. There was no significant difference in consumers' willingnessto-pay between Autumn Crisp dried apple products and commercial products with sulfites (p>0.05), indicating strong market potential for this apple variety in the dried fruit category. The information from these studies will be essential in helping small-scale producers develop scheduled processes for safe and high-quality products. ii