Wireless Neurophysiology For The Study Of Behavior In Health And Disease 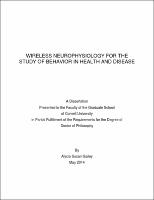 The objective of this study was the development of a simple but versatile wireless voltammetry device that can wirelessly record the release of oxidizable neurotransmitters in the central nervous system of freely moving research animals and to demonstrate the utility of the device in freely behaving rats. The rationale behind this approach is in allowing freedom of movement of small animal subjects during electrochemical recording of neurotransmitter release. Neurotransmitters play a vital role in signaling within the central nervous system. A variety of neurological diseases are associated with neurotransmitter abnormalities. Parkinson's disease is an example of such a disease, characterized by dopamine depletion in the basal ganglia structure due to a death of dopaminergic neurons in the substantia nigra. With the use of the wireless voltammetry device presented here, the motor abnormalities associated with Parkinson's disease can be examined in animal models during recording experiments without the mess of wires. Chapter 1 gives an introduction to dopamine and its role in a variety of brain functions from motor control to the feeling of pleasure. Chapter 2 demonstrates the utility of the wireless device in the recording of dopamine release in vitro. By comparing results of the conventional wired setup to results of the wireless setup, the reliability of the wireless device in detecting dopamine release is established. Chapter 3 presents the use of the wireless device in recording dopamine release in a live rat. In these experiments, the circuit board and battery were placed inside of a pouch that was secured onto the back of a rat with a harness. Chapter 4 presents a discussion of implications for a broad array of future work regarding the role of wireless voltammetry in studying the neurobiological underpinnings of observable behavior. Chapter 5 presents an electronics curriculum for junior and senior level high school students in the local school district.