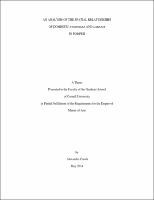 The domestic mosaic fountains commonly called nymphaea in Pompeii are structurally similar to domestic house shrines known as lararia. Like lararia, these domestic nymphaea often include temple facades and depictions or statues of gods. Despite these similarities, a lack of ritual evidence has made evaluating the possible religious connections of these fountains difficult. In an attempt to find another methodological approach to explore the question of whether or not these fountains are similar to lararia, I conduct a relational spatial analysis of thirty Pompeian houses to investigate nymphaea as features of domestic cult. By comparing spatial similarities in the placements of both nymphaea and lararia in Pompeian houses, I am able to conclude that nymphaea often occupy spaces that are usually home to domestic shrines. The interchangeability between the placement of domestic nymphaea and other house shrines combined with a more detailed reading of the decoration on nymphaea suggests that these water features are more than simple ornamentations in wealthy Roman homes. Pompeian nymphaea recall the religious sphere through broad associations with divine beneficence in their placement within gardens and through their imitation of natural grotto features, bringing into the house a sacred landscape reminiscent of that seen in "sacral-idyllic" wall paintings. If nymphaea indeed possess religious significance, then they serve as conspicuous displays of the homeowner's piety during the period of the early empire, a time when many Romans were redefining their own social identity under a changing government and concern for preserving the old morals of the Republic became a central issue.