On the forms of unicursal quintic curves 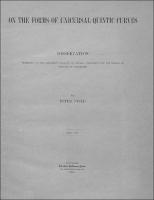 The purpose of this paper is to study the forms of plane unicursal quintic curves. The basis of classification is the same as that used by Meyer * but the method of obtaining the curves is entirely different. Meyer classified the curves according to the sequence of the double points and his scheme was similar to that employed by Taitf in his first paper on knots. The essential difference is that nugatory knots may appear. Suppose a curve has the six double points A, B, C, D, E, F, and suppose a variable point to describe the curve. Whenever the generating point passes through a node, indicate this fact by writing the symbol of that node. When a loop is formed near a node A the symbol would be .... AA .... for that part. Two curves which have different symbols will be regarded as distinct. A more specific classification would be one which considers the reality and positions of the inflexions, but this would lead to an almost infinite variety of forms.