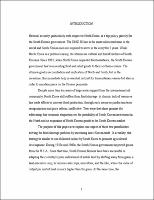 This paper suggests one possibility for the elimination of poverty in North Korea. Despite its efforts to increase food production, North Korea has been suffering a serious food shortage problem. Under the current political and economic system, it is very unlikely that North Korea by itself can supply adequate food to its people. A viable way to solve the chronic food shortage is to change government policies regarding the kind of crops farmers raise. Instead of pushing for increased grain production, the government needs to encourage farmers to raise non-grain crops, which can be exported to South Korea or Japan. Since prices in the South are much higher than those in North Korea, exporting non-grain crops and importing grains would be more profitable to the North Korean government than producing more grains in the current system. In order for such a change to be successful, the North Korean government must try to reduce transportation costs and facilitate construction and utilization of railroads and roads between North and South.