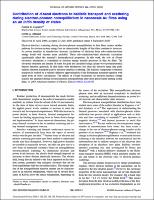 Electron-interface scattering during electron-phonon nonequilibrium in thin films creates another pathway for electron system energy loss as characteristic lengths of thin films continue to decrease. As power densities in nanodevices increase, excitations of electrons from sub-conduction-band energy levels will become more probable. These sub-conduction-band electronic excitations significantly affect the material’s thermophysical properties. In this work, the role of d-band electronic excitations is considered in electron energy transfer processes in thin Au films. The electronic structure and density of states for gold are calculated using a plane wave pseudopotential density function approach. In thin films with thicknesses less than the electron mean free path, ballistic electron transport leads to electron-interface scattering. The ballistic component of electron transport is studied by a ballistic-diffusive approximation of the Boltzmann transport equation with input from ab initio calculations. The effects of d-band excitations on electron-interface energy transfer are analyzed during electron-phonon nonequilibrium after short pulsed laser heating in thin films.