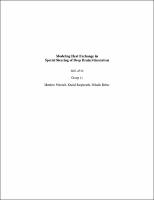 Deep brain stimulation (DBS) is a treatment that involves insertion of a probe and stimulation of brain tissue with an electric potential (or injection of current). Electrical stimulation has been demonstrated to be an effective treatment in a variety of neurological conditions, serving to relieve motor-symptoms and tremors in advanced stage Parkinson’s disease and Essential tremor. Current DBS therapy involves electrically stimulating a specific region of the brain symmetrically about the probe lead via pulses of electrical potential. Currently-used leads apply potential symmetrically about the cylindrical probe’s central axis. This, however, is problematic, since stimulation needs to be highly specific, yet there is little that can be done to alter the applied electric field after the probes have been implanted. Asymmetric stimulation, on the other hand, allows increased control over direction within these complex regions of the brain, affording more targeted stimulation following the implantation procedure. A problem with any form of electrical stimulation, however, is heating. Even a 1 °C change in temperature can cause adverse effects due to strong membrane potential and pump kinetics dependence on temperature. Heat is generated due to both Joule heat from the applied potential and through increased metabolism rates caused by physiological shifts in neurons influenced by the stimulation. Our project focused on creating a computer model of electrothermal deep brain stimulation utilizing a novel probe design based upon the one proposed in Martens, et al in order to ensure safety and efficacy of this probe. We created a 3D model in COMSOL representing a probe capable of asymmetric heating. A symmetric configuration of our model showed a similar temperature distribution to both computational models and experimental measurements made by Elwassif et al., as well as a similar electric potential profile to models by Martens, et al, demonstrating validity of our computational model. Stimulation due to asymmetric stimulation showed almost no significant temperature increase in the unstimulated direction when the probe was asymmetrically activated, and ultimately ensured safe deep brain stimulation and effective temperature and voltage control. The sensitivity analysis showed that voltage was the most important factor for temperature distribution. Because of this, we believe that optimization should be based on an individuals’ symptoms and geometry at which the probe is implanted. Models like ours lead to better understanding of heat distribution under asymmetric stimulation and more affective deep brain steering stimulation, ultimately leading to higher success rates for suffering neurological conditions and decreasing likelihood of brain damage.